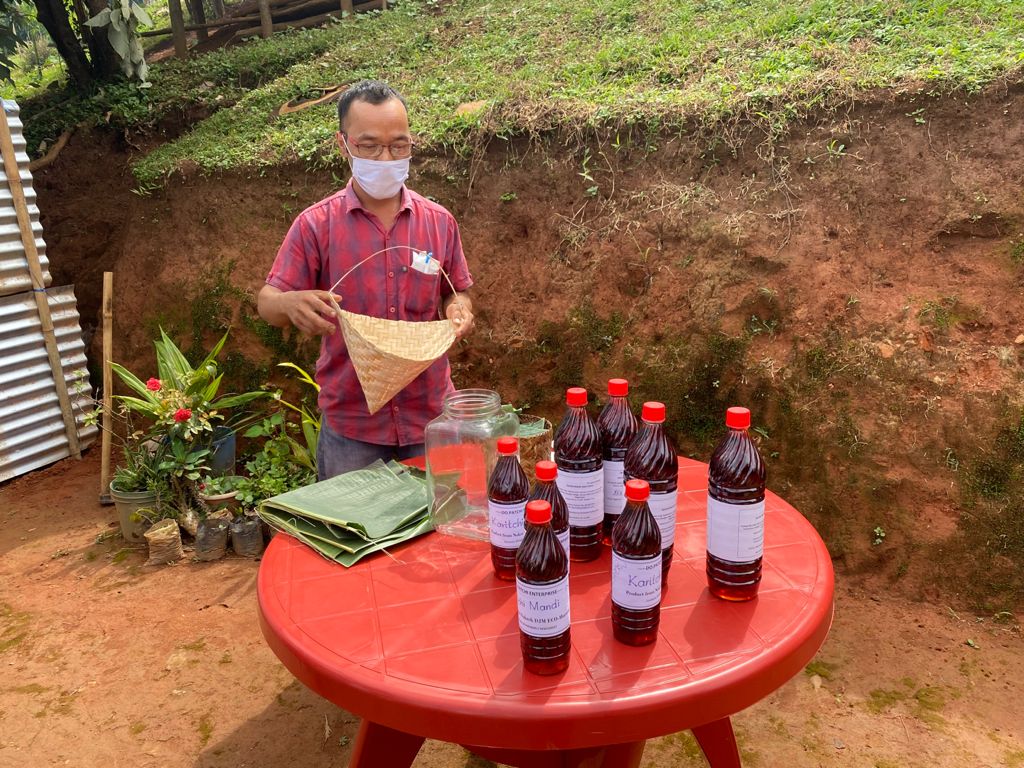 Sasatgre Village lies at the foothill of Nokrek peak, under Rongram Block in Meghalaya’s West Garo Hills district and is 32 kilometres away from Tura. Shri Dharmen Momin is an entrepreneur, and tourists know him for his warm welcoming nature. As a sole earner and active member of Sasatgre village, Shri Dharmen longed to revive the oldest Garo recipe “Karitchi” or local soda, and was selected as one of the Innovators under the Community-Led Landscape Management (CLLMP) project in 2020

Shri Dharmen G. Momin was born on 11th April 1984, in Sasatgre village. He studied up to class ten (10) in Govt Boys’ Hr Secondary School Tura. He married Smt. Pringchita B. Sangma from Wanangre, Ampati village, in 2007, and they raised three children together.

He worked as a peon from 2001 and 2002, under the Election Commission office, West Garo Hills, Tura, and as a Secretary in sanitation and literacy (Block Level) under Rongram Block from 2004 to 2009. After that, he tried his luck as a businessman and opened a mobile phone shop at Rongram bazaar from 2010-2015. During this time, he also worked as a videographer for NESFAS in Shillong.

Dharmen is also an avid storyteller and, in his free time, would usually entertain children with old stories about his grandparents. His love for traditional knowledge grew from his younger years and while working with various departments, he started gathering knowledge on business, communication skills, hospitality besides promoting local cuisine and local soda making to expand his social circle

He soon began promoting cultural products, cuisines, ingredients (local soda), bamboo baskets, etc. He also attended many events, including the “Terra Madre” in 2015, where he promoted indigenous slow-mo food like “Karitchi”. Hence, he became one of the representatives of his village to promote Garo culture and tradition.

The idea of making Karitchi came to him when he noticed that not many people in Garo Hills were producing the local soda despite the massive banana plantations in and around the region.

“Banana plantations are being done and grown anywhere in this temperature, and to make this soda, wildly available banana stem is good enough,”

In 2014, Shri. Dharmen had gone to Italy to introduce Karitchi to the people under Food Security NESFAS while working as a participatory video maker. He received a warm response from the people who seemed to enjoy listening to him as he explained the process of making the soda. Some also wished to buy the product.

“These days many people buy readymade soda or Sodium Bicarbonate anywhere from the grocery stores/chemists shops,”

Since then, he decided to focus on making “Karitchi” (a soul ingredient to add while making the famous Garo Cuisine called “Kappa”).

Shri. Dharmen also stated that at first, he made the soda for personal consumption and only began making Karitchi for commercial sale in 2020. 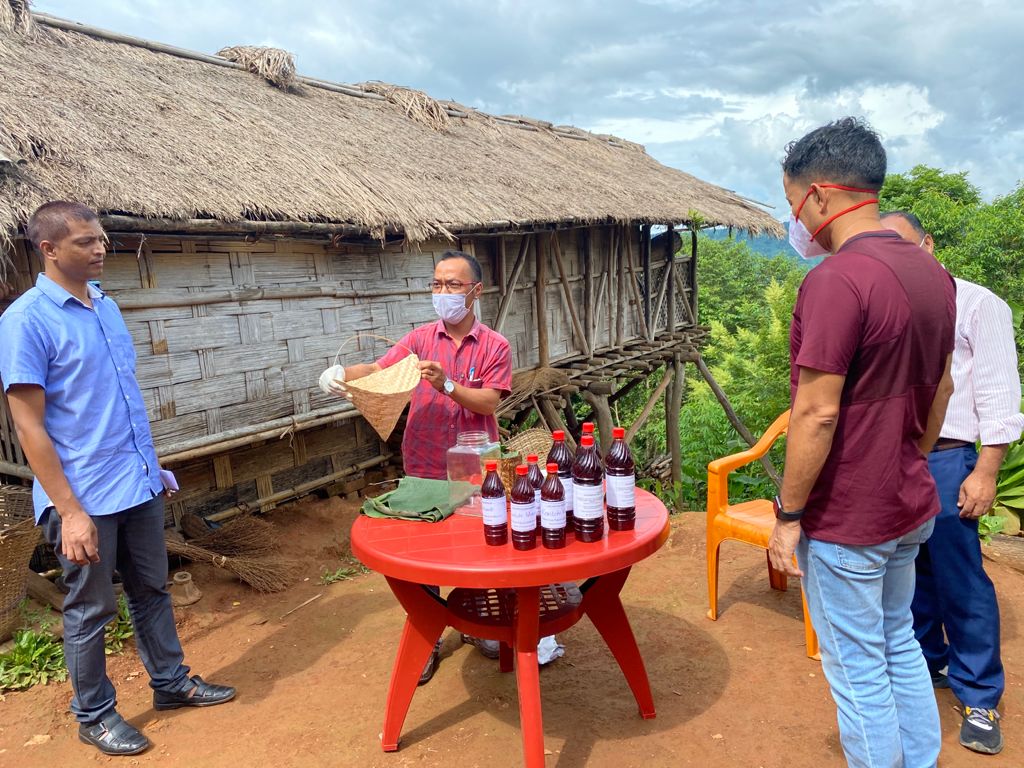 It was then when the District Knowledge Management (KM) team of West Garo Hills met him in 2020 to learn more about his interest in reviving “Karitchi”. He narrated his story and came to know that he was well-known among various departments.

A Technical & Financial Feasibility tour was conducted on 20th January 2020 to his proposed site and the CLLMP field engineer along with the KM unit of West Garo Hills submitted the reports to the SPMU-KM.

“When I was in Italy, I was nervous but when I started talking about my traditional indigenous liquid soda I was proud.”

On closer observation, this became a unique proposal that could be showcased all over the world.

The indigenous way of making liquid soda is considered a best practice because it is not seen or practised anywhere else. Through CLLMP, Shri. Dharmen was presented with an opportunity to expand his business and focus more on encouraging the locals to consume locally available Sodas for cooking as this is better than Sodium Bicarbonate.

That way, he wanted to promote and revive this lost “Indigenous Liquid Soda”.

Above all of his qualities, he is well equipped with communication skills. He has become an example for all the other upcoming and interested entrepreneurs who wanted to revive their cultural values and traditional knowledge. As mentioned earlier, he had been to Italy all by himself and was confident in taking on the challenges ahead.

The process of making “Karitchi”

The process of making karitchi involved peeling and drying the banana stalk. It begins in October, and the peeled-off stalk is put out to dry till December. The stalk is then burnt, and the ashes are put in the “gengreng” spoon made of bamboo. Three layers of bamboo leaves line the gengreng, and a piece of charcoal is used at the bottom to filter the water that is poured into it. The charcoal can also be adjusted with a small piece of bamboo if the water droplets flow too fast.

One disadvantage is that the ashes cannot be kept in bamboo baskets or aluminium utensils, as this would cause the ashes to lose their potency. Therefore, the ashes are kept in airtight plastic containers. After the filtration, the final product can be used for consumption.

The Karitchi is sold for Rs 100 per litre and Rs 50 for half a litre. According to Shri. Dharmen, the final product can be stored up to a year and lasts longer if kept in glass bottles.

On being asked, Shri. Dharmen stated that he would start making the soda in October and would carry on up to April. The process ensures that he has enough stock to sell for the entire year. 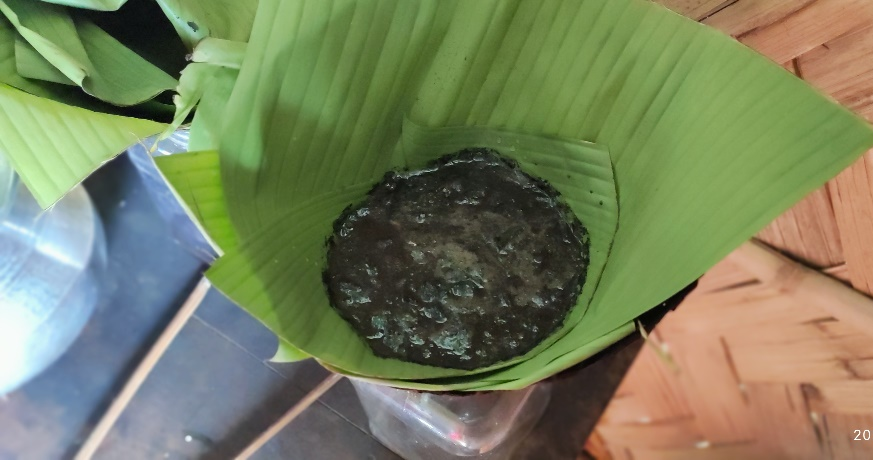 A few tablespoons of ‘kalchi’ are enough to prepare some well-known Garo recipes such as wak kappa, do’o kappa, nakam bitchi, etc.

Step 2: Peeling off the skins of banana trunks.

Step 3: Let the peels dry out in the sun for few days.

Step 5: Crush till it turns into a fine powder and is ready to be stored in containers.

Besides the Karitchi business, Shri Dharmen is also a beekeeper and recalled collecting honey from the jungles of Nokrek back in his early days. As he took up beekeeping in 2015, he began promoting locally sourced honey as well. Then also began selling honey in the weekly markets, and following the high rise in demand for local honey, he decided to consider beekeeping as another source of income.

With help from the Horticulture Department, he attended training sessions on beekeeping at Umran RRTC in Ri-bhoi in 2018. Though he didn’t receive any other support, he took a loan of Rs 4 lakhs from PMEGP to set up his beekeeping business.

Currently, there are 38 colonies in his apiary. The species of bees are “Apis Cerana Indica” locally known as “Bija kol”.

Do.patchi is a Garo name given to a bird that lives on the thatched roof of a hut. Do.patchi is also known as a swallow. Do.patchi Homestay also serves as a bird sanctuary, and this idea came to Shri. Dharmen when he noticed that many Do.patchi birds would visit his house, which has a thatched roof.

Thus, he decided to build the homestay out of bamboo and made sure it had a thatched roof as he wanted to set up a safe place for the birds.

The Do.patchi Homestay was inaugurated in November 2019 by Shri. Ram Singh (IAS), the D.C. of West Garo Hills District, Tura. We may note that international tourists have visited the homestay apart from local tourists. The homestay comes for Rs 1,500 per night, and one can experience the traditional Garo lifestyle. However, due to the ongoing COVID-19 pandemic, tourists have currently stopped visiting the place.

Shri. Dharmen stated that he wants to protect the animals and birds in his village. Besides this, he wants to conserve the lush green forests and stated that he already tried his best to identify and protect medicinal plants growing around the area. He never eats meat because his purpose is to save animals and birds from extinction. He planned to work in Nokrek, but this came to a standstill due to the lack of support.

Apart from being a nature lover, he enjoys researching topics on biodiversity, tradition, and culture. He said he loves his birthplace because of its natural beauty and peaceful environment and advocates for a clean and green environment.

Shri. Dharmen’s dedication and hard work made him a very successful and popular entrepreneur. He had the support of his family, and according to him, this is one of the reasons he could overcome the many challenges. His goal is to keep making soda and sustain his honey business to usher in sustainability and a better way of life.

He also wants his community to be supportive and help him in growing his business. As he says, “They live with me, and I live with them.”