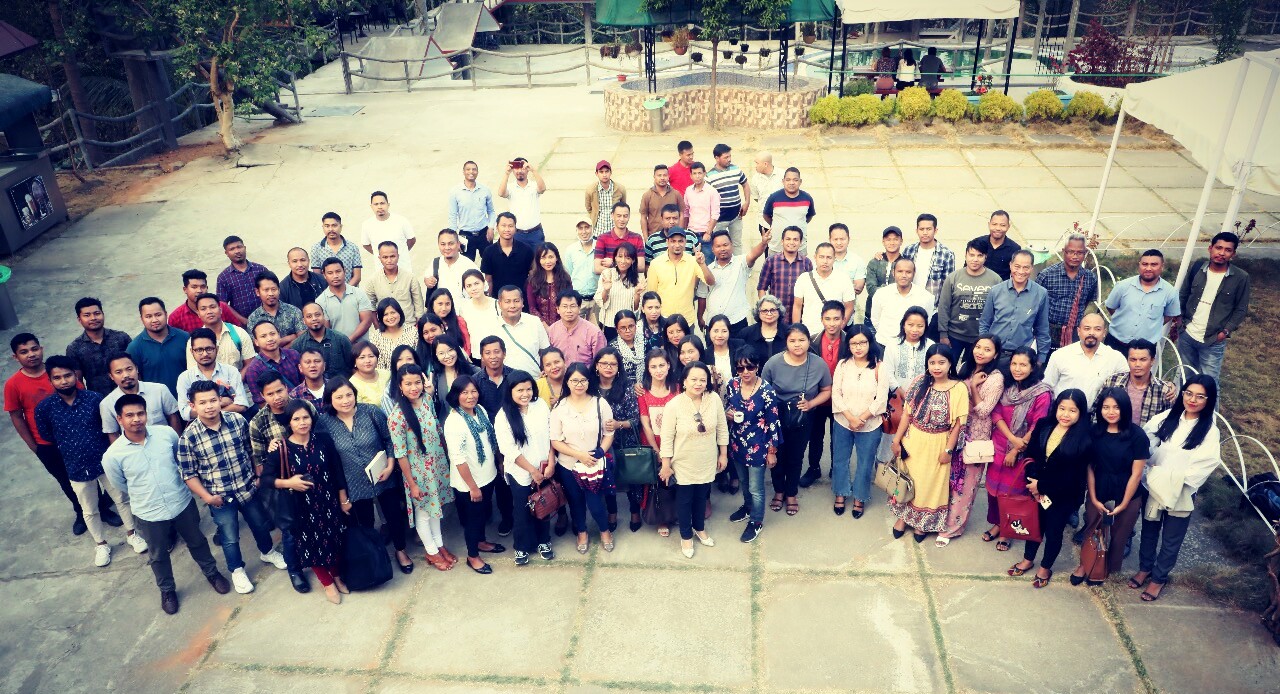 A two-day Megha-LAMP retreat programme was held at Tura, West Garo Hills District. The retreat was conducted with an aim to achieve absolute clarity, at all levels, on the overall project objectives and on the immediate plan of action for the next three months. The retreat also aims at enabling learning’s across districts by delving into the implementation experiences (both success and failures) of each district. So also, the retreat aim to build team spirit and to inspire all staff members.

DAY 1: BRIEF HIGHLIGHT OF THE ACHIEVEMENT AND PROGRESS OF THE DIFFERENT COMPONENTS

The Performance Link Incentive which will soon be made into practiced within the organization was highlighted. She also spoke about Key Performance Indicator (KPI) and how KPI is connected with the PLI. Therefore, she suggested that all DPMs will have to assess the KPI of their team members. Stating that if the member achieved then incentives will be provided. Similarly, she said that the incentives will be credited twice a year. It was also mentioned that all staffs are to use the HRMIS. Further, she also spoke about the type of leaves that the employees can availed that is Annual Leave, Sick Leave and Compensatory Leave.

Speaking at the gathering Shri. A. Suting mentioned about the Multi-Stakeholder Platform (MSP) and spoke on the initiatives that should be taken by the project to help in uplifting the community. 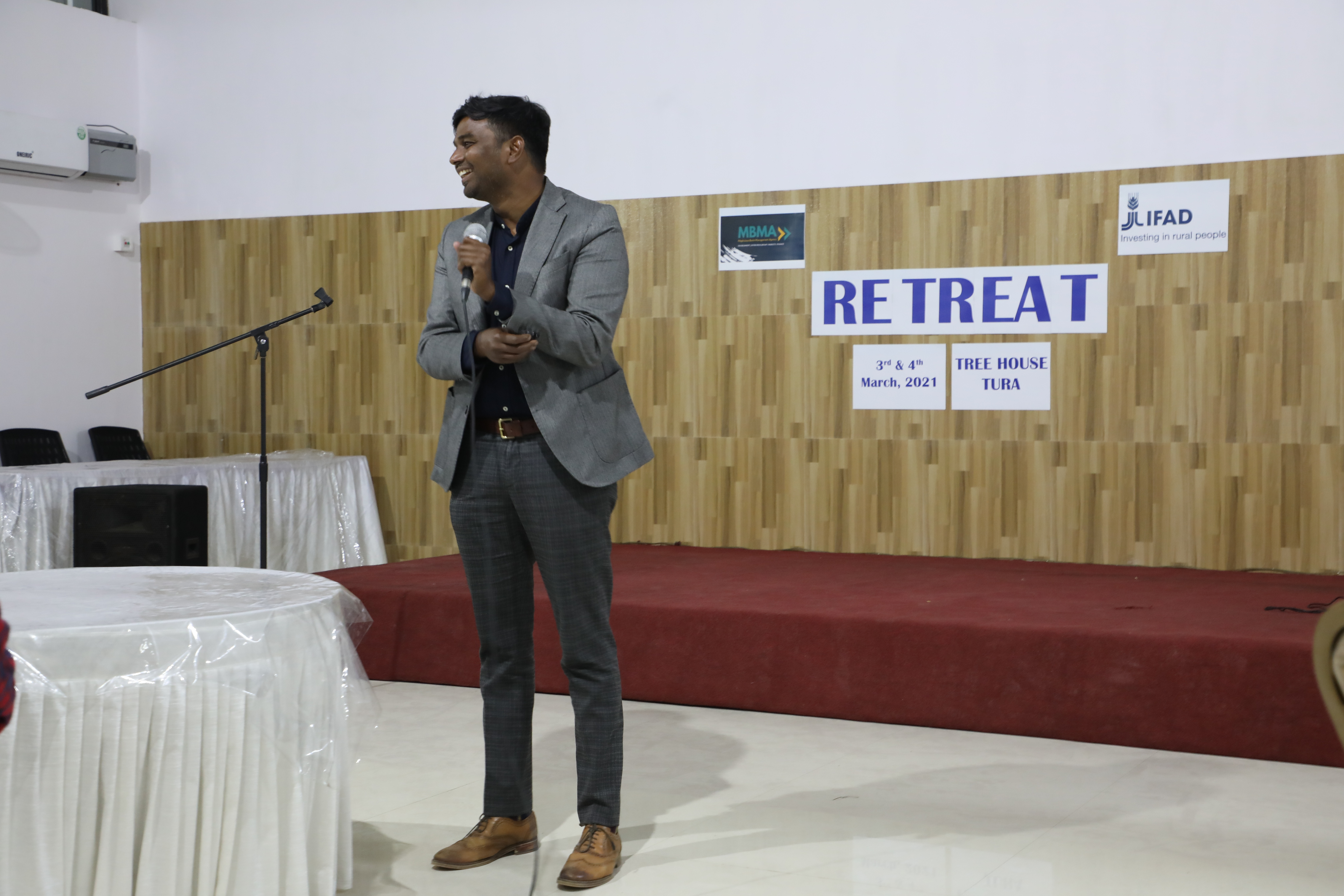 Megha-LAMP While addressing the Megha-LAMP members, Dr. Kumar expressed the essence of the Project which is Livelihood and Access to Markets stating the importance of access to market linkages for people in rural areas. Dr. Kumar recommended the team not to confuse the villagers with jargons such as ISC&ED or RF, but to go to the field as members of Megha-LAM Project.

Referring to the Chief Minister’s Mobilization Support for Producers event held earlier in the day, Dr. Kumar stated that the idea is about scaling up the LAM Project to the whole state. Normally in projects, extra agency would invest some money and would be conducting work in selected villages; but, however, if the government thinks that the project is doing a meaningful work than it would be implemented across the entire state. Dr. Kumar stated that the Megha-LAMP has become a model for the state in terms of livelihood promotion and access to markets.

Further, clarifying the name given to Chief Minister’s Mobilization Support for Producers, Dr. Kumar explained that it would be renamed as Entrepreneurship and Access to Markets (EAMP) project. Dr. Kumar further informed that the Soil and Water Conservation Department has taken over the full responsibility of initiating Natural Resources activities across the state which was started by the Integrated Natural Resources Management (INRM) component. A drive to identify people at village level is being conducted who would be leading the natural resources management in their regions. Therefore the model of LAMP has been up scaled and would be fully taken over by Soil and Water Conservation Department.

Regarding Rural Finance (RF) and Inclusive Supply Chain & Enterprise Development (ISC&ED) components, Dr. Kumar stressed on the need for the two components to work together, in creating financial opportunities, and generating marketing and aggregation of produce. Commenting on the structural setup of the formation of Producer Groups (PG), Service Providers (SP) and Collective Marketing Centers (CMC) Dr. Kumar said the system begins with the framers who stand as the base of the pyramid. Through these farmers PGs for different sectors would be formed who would be receiving seed money of Rs. 5000 per member per household. Thus the Window 1 initiation under ISC&ED has now become universal in the state. However, Dr. Kumar also stated that a monitoring system should also be generated such that the use for these funds can be followed. Dr. Kumar stated that the Project the target is to achieve is 4.5 lakh Households as members of Producer Groups, out of which 1 lakh each will be covered under Megha-LAMP and PRIME. While the remaining 2.5 lakh would be covered under KMW Farmer’s Mobilization project which would flag off next year, and RF and ISC&ED would remain as the main components for the project.

Regarding Service Providers, Dr. Kumar explained the concept is about extending services to farmers at village level. Therefore chosen people from the village would be given training (paravets) who can provide various forms of services for their own village. These SPs would receive a minimal fund through which they can utilize to purchase tools and equipment which would enable them to provide services in their villages.

And at the top of the pyramid are the CMCs for whom infrastructure would be provided to run the collection centers, food processing, markets, etc. Dr. Kumar said that it is full self-sufficient model which would be owned by farmers, run by farmers and is completely independent. Dr. Kumar further added that the CMC loan is an interest free loan. So as per the model the PGs will become cooperative societies who will take charge of credit linkage and value chin as well.

In order to manage any duplication of members from the same household, Ration Card would be used. Out of the 4.5 lakh Households as members of PGs, and 15-20 thousand people would be SPs of different trade. So there would be 7-8 hundred Cooperative societies in the whole state.

In his conclusion, Dr. Kumar encouraged the staff to assist and facilitate the community people in 3 nights order to uplift their wellbeing and livelihood

Interaction of staffs during M-LAMP Retreat