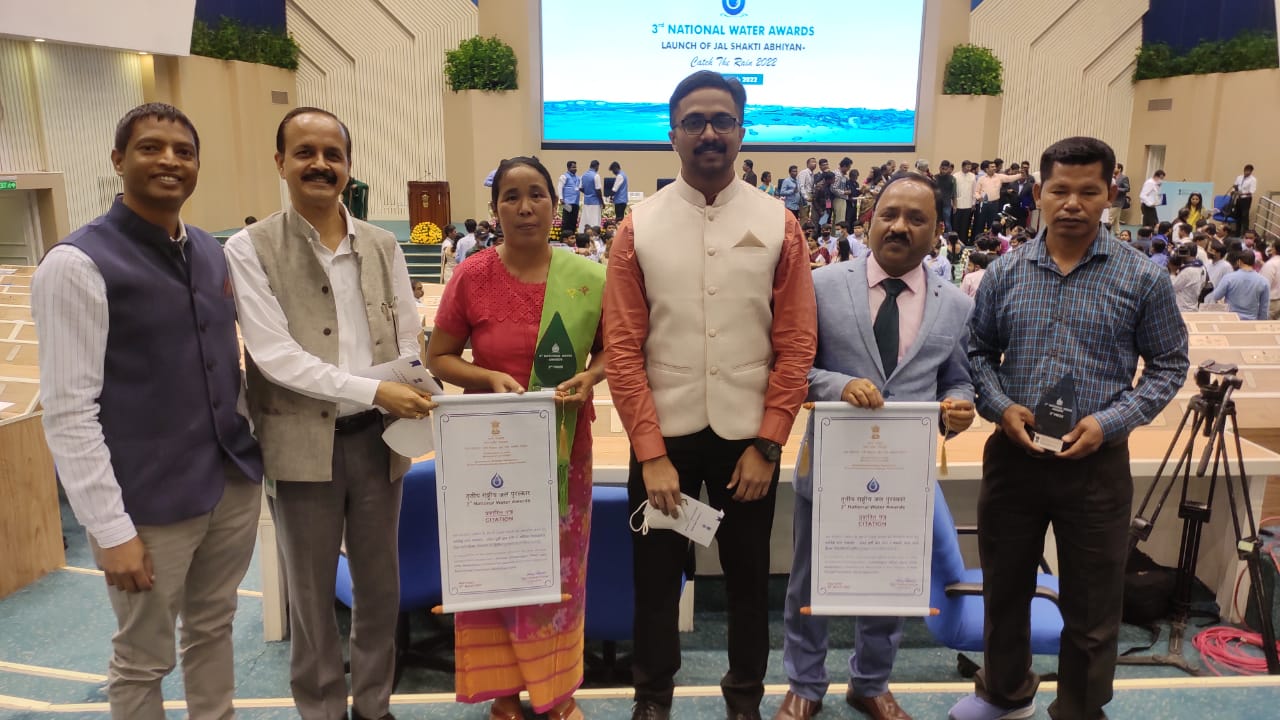 In a moment of pride for Meghalaya, Aminda Simsanggre and Chambagre villages under West Garo Hills District placed second and third in the “Best Village Panchayat” category (North East Zone) at the 3rd National Water Awards. The formal awards distribution ceremony was held at Vigyan Bhawan, New Delhi on 29 March 2022 where both villages were spotlighted for spearheading the best community-led Natural Resource Management (NRM) practices. The awards were earned on the strength of efficient service delivery by their VECs and the active participation and commitment of the communities to bring about inclusive development.

Background
Aminda Simsanggre is under Gambegre C&amp;RD Block and is home to 95 households that are dependent almost entirely on agri-based activities for livelihood. The village is one of 400 covered by the World Bank-funded Community-Led Landscape Management Project (CLLMP) for the implementation of NRM-related initiatives to alleviate issues related to landscape deterioration, afforestation, drudgery, and water security. A village survey revealed that only 14 households had water connections before CLLMP’s arrival while the rest of the community- Aminda Kongsang Gittim, Aminda Ading, and Bazaar Gittim – has to fetch water from a different source which can take up to one hour per trip. Other challenges include
poor road connectivity and inadequate infrastructure. 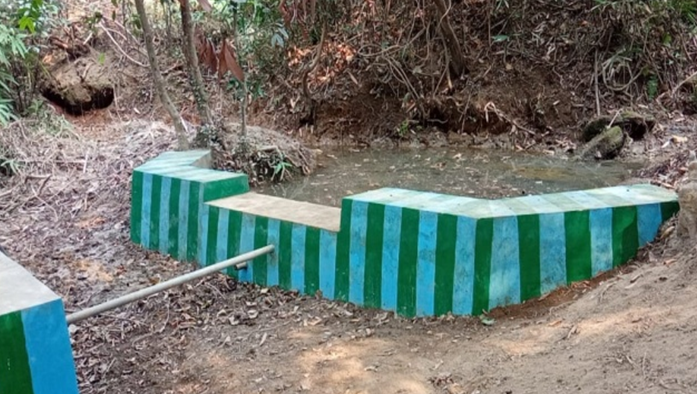 Interventions include the construction of water conservation structures such as cemented storage tanks and conservation dams at 4 different locations in the village, contour trenches at Rongka Chiring and Nepal Chiga to recharge the springshed area and make them perennial, a 12-bedded community nursery at Aminda Chiring where transplantation of local tree species to the forest reserve areas has already started, and the promotion of the Berkeley method of hot composting at Aminda Chiring to increase production and quality.

Since the project’s inception in 2018, the village has made remarkable progress in just over three years. A total of 11 activities has been completed. The afforestation measures have benefitted all households in the village. The springshed management interventions have directly benefited 12 households. The soil and water conservation initiatives have benefited 13 households, while the community nursery has benefited all households where 40% of saplings have been sold. Further, the community has declared the forested area a community forest reserve area and has enacted rules and regulations for all the existing water bodies. Earlier on 26 January 2022 during the occasion of the 73rd Republic Day, Smt. Pritish S Sangma, Secretary of the Aminda Simsanggre VNRMC, was felicitated by Smt. Agatha K Sangma, Hon’ble Member of Parliament, Lok Sabha, Tura Constituency for her contributions to the development of his village.

Chambagre in Selsella C&RD Block is one of 1350 villages of the IFAD-supported Meghalaya Livelihoods and Access to Markets Project (Megha-LAMP). It has 42 households employed under MGNREGA while most residents are engaged in either agriculture or horticulture. The village also has plenty of areca nuts, black pepper, and cashew plantations while the total area under paddy cultivation is 50 Bighas. Pre-interventions, the village was attempting to cope with severe water shortages for domestic and irrigation uses. The lack of an irrigation system had impacted paddy cultivation, and with domestic water, women and children would spend 2 hours getting to and returning from a clean water source. 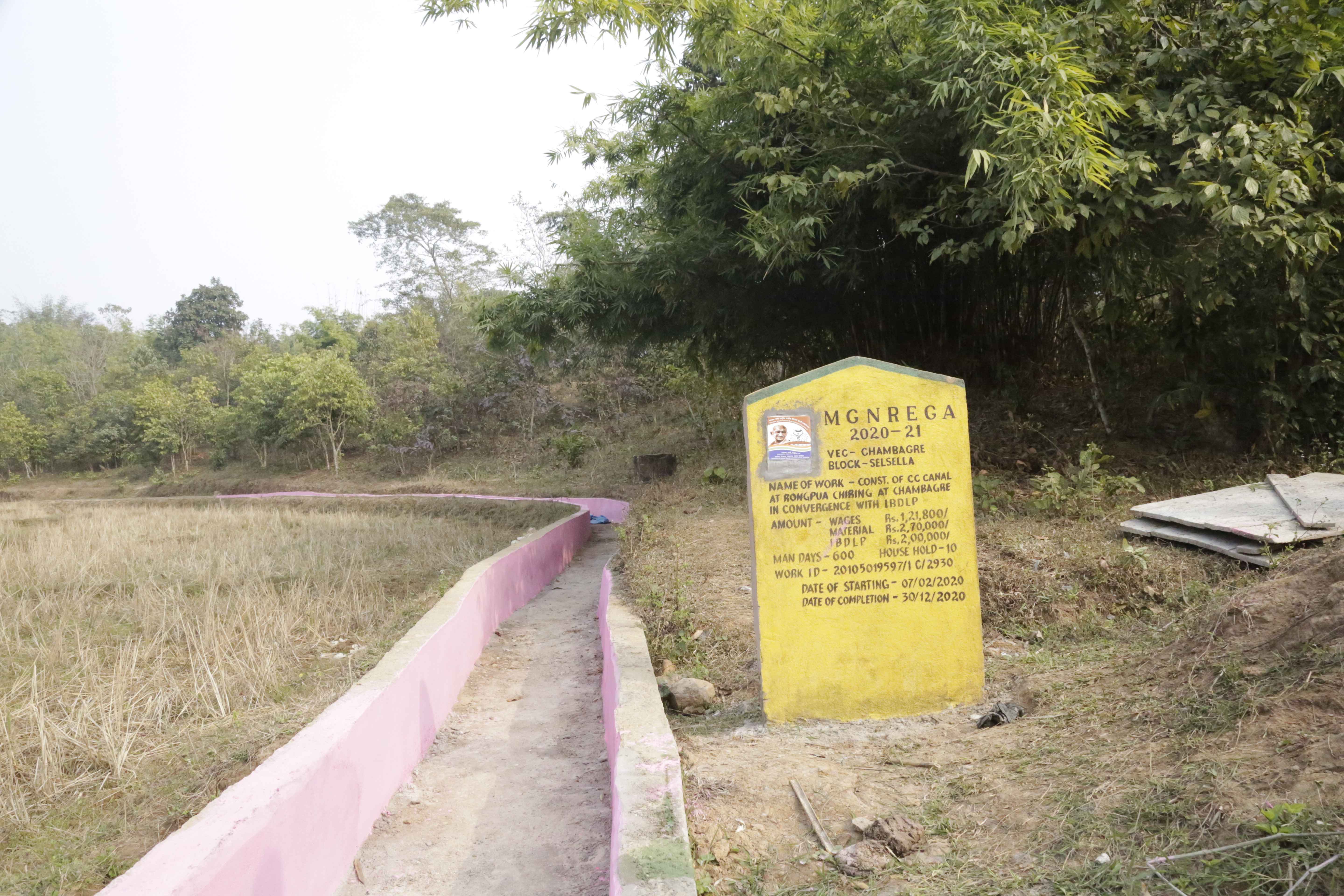 The community participated actively in the planning process for implementing sustainable approaches of NRM. Community-led interventions included the construction of two water tanks in the upper and lower regions of Chambagre with capacities of 14,000 and 17,000 liters and an irrigation canal that covers a 1-hectare land area. About 5000 forest trees have been planted on 10 hectares of community land to treat the catchment areas while a community nursery has been established.

Both tanks are benefiting 42 households in total and 15 households have benefitted directly from the construction of the irrigation canal. The time taken to fetch water has been reduced to only 30 minutes per day. The community is highly aware of spring rejuvenation initiatives and the need to preserve the indigenous plant species for water retention. The initiative to promote afforestation activities within and outside the village vicinity has resulted in the creation of livelihoods for the village’s unemployed youth. 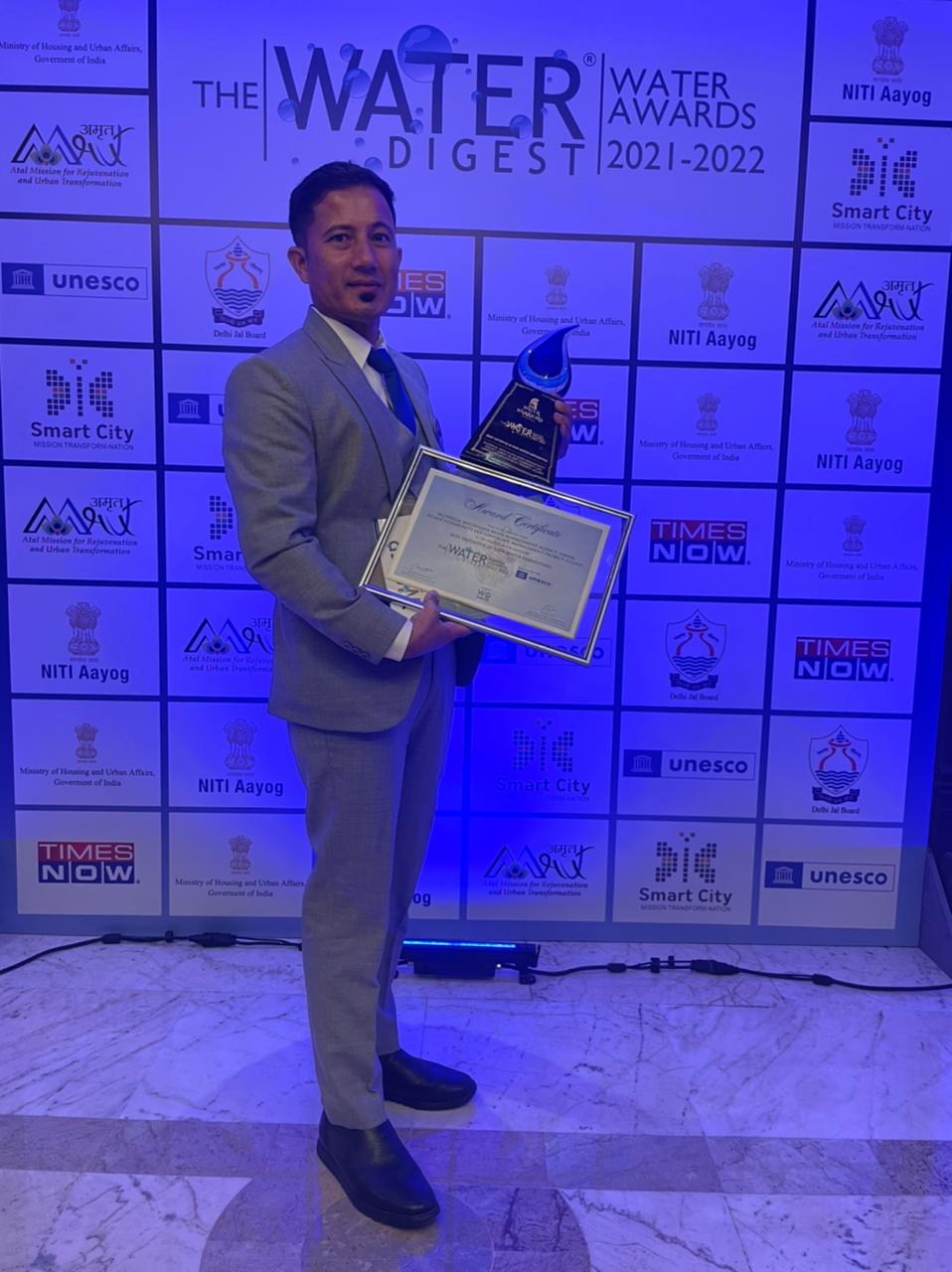 NRM Committees have been constituted by both projects in their villages to ensure the participation of households, especially women, in the decision-making processes for the planning and implementation of further activities and to advance gender equality.

Gracing the occasion in New Delhi were Minister of Jal Shakti, Sh. Gajendra Singh Shekawat, Minister of State for Jal Shakti & Food Processing Industries, Sh. Prahlad Singh Patel, and Minister of State for Jal Shakti and Tribal Affairs, Sh. Bishweswar Tudu. The State team was led by the Deputy Commissioner of West Garo Hills District, Sh. Ram Singh (IAS) who himself was awarded the Water Warrior Award for Best Initiative in Rain Water Harvesting after overseeing the implementation of record-breaking works (more than 2500 numbers) undertaken under MGNREGA, MBMA, and CLLMP.