The Chief Minister’s Mobilization Support for Producers fund provides support to farmers of Meghalaya to help increase production and overcome challenges that relate to the cultivation of agricultural produce and the rearing of livestock. Each block was provided with a fund of Rs 5000 per Producer Group (PG) member while 18 Service Providers (SP) or paravets received a fund of Rs. 50,000 each. Further, 18 Collective Marketing Centers (CMCs) were provided with support funding of Rs. 7 lakhs each for pre-fabricated storage.

The initiative will encourage producers to sell and trade directly at the CMCs that are set up in those villages or clusters which have strong Integrated Village Cooperative Societies (IVCS) and big potential for improving incomes through the provision of support services that include aggregation, processing, and marketing of produce.

Dr. Vijay Kumar D. spoke about the importance of the collectivization of agricultural produce. While mentioning that Meghalaya is known for quality agricultural produce such as Lakadong Turmeric, ginger, various handicraft works, and other products, he stated that production has always been done at the individual level and therefore, farmers often face numerous challenges such as subsistence-level practices, cultural or geographical constraints, production and marketing issues as individuals, inadequate access to credit, and poor market linkages.

To overcome these challenges, the IFAD-supported Megha-LAMP Project has in the past 2 years conducted intensive studies to identify innovative ways to address existing challenges, and the idea of setting up CMCs in different clusters and villages materialized. These CMCs are primary farm gate infrastructures that are nodes for aggregation, processing, and marketing of produce in the villages and clusters under the project. The CMC is also an input supply unit. Hence, it serves as a one-stop-shop at the village level.

On the role of Service Providers, Dr. Kumar informed that the project has built a cadre of people that can provide extension services such as vaccination, crop advisory, supply of input and feed, and aggregation of output to communities including those that reside in hard-to-reach villages with difficult terrain and poor or no means of transport.

He stressed that it is essential for farmers that are engaged in similar types of activities with high potential for income generation to form a PG so that collectively, earnings would improve.

Started their piggery PG through the initiation of Meghalaya Basin Management Agency. They have a separate activity for pig breeding and pig fattening. Five members are in charge of breeding while six others take care of fattening.

Started their piggery PG through the initiation of Meghalaya Basin Management Agency. They have a separate activity for pig breeding and pig fattening. Five members are in charge of breeding while six others take care of fattening.

Started their PG for potato cultivation after attending an awareness programme conducted by the EFC staff of Khatarshnong-Laitkroh Block. Since the inception of the PG, they have more knowledge about new technologies to further their skills. With the support fund they hope to produce more agricultural products to market outside the State.

While announcing the launch of the Chief Minister’s Mobilization Support for Producers fund, Shri Conrad K. Sangma informed that when his Government came to power, the vision was to improve the lives of every citizen of the state in every sector. To reach these targets, they had to first identify the gaps that remain front and center within the system to cope with the challenges in entrepreneurship, farming, artistry, sports, music, and education. Once these gaps were identified, it became clear that entrepreneurship was the base that could touch many aspects of life. To facilitate our entrepreneurs, support funding and services are being afforded in the form of awards, guidance in starting a business, and professional trainings so that value is added to their work while the entrepreneurial ecosystem, on the whole, is strengthened.

Shri Sangma put special emphasis on the need to create a robust ecosystem for entrepreneurs in the tourism sector. Training in various hospitality services will improve the quality of experience of the tourists while strengthening the sector will also create job opportunities for Meghalaya’s youth. Similarly, in the farming sector, challenges continue to exist for the government and the producers concerning the production and selling of individual produce. Under Megha-LAMP, the concept of PGs and SPs was created so that larger numbers of produce are sold directly at the CMCs which in turn will not only benefit the farmers but will eliminate middlemen.

Shri Sangma congratulated the MBMA team for structuring the entire process in the right way – for conceptualizing and creating the different sections and core areas, and for finding the right resources moving forward.

He urged the farmers to make the best use of this funding support whereby they could grow their PGs into cooperative societies and avail benefits not just from the state government but also from the central government. He cited Padma Shri Awardee Nanandro B. Sangma’s contributions to the State’s agriculture sector and invited the farmer participants to look at the Black Pepper farmer’s success story for inspiration and encouragement.

The Chief Minister’s Mobilization Support for Producers fund is purely to provide the best measures in assisting the producers in all forms.

Initially, they found it difficult to be part of the long 45-day training. They are however grateful because now, they can provide many services to members involved in piggery. They can easily provide vaccination for the pigs in their villages without having to travel to veterinary centers.

As a registered partner under M-LAMP, he has been able to attend various trainings such as beekeeping, pig rearing, agriculture, and other allied activities. In 2019, he was identified as a service provider for piggery. He is now able to serve many villages under the cluster by providing services in vaccination, medicines, and others. He has also provided trainings on pig rearing and beekeeping within the cluster of villages.

Shri Marcuise N. Marak stated that the Chief Minister’s Mobilization Support for Producers scheme will provide support to the agricultural sector and assist in the marketing of produce. He added that this is an inspiring initiative of the government that can help raise the living standards of the people at the grassroots.

Shri Thomas A. Sangma lauded the Chief Minister of Meghalaya for the first-of-its-kind initiative in the State adding that it will help to further improve livelihoods. He encouraged the farmers and producers involved in the agriculture and allied sectors to come forward and make the most of the support provided by the government.

Earlier before the CMCs were formed in their village, they used to sell their products on their own at low rates. A big challenge was how to market their produce at better and more competitive prices. In this aspect, the CMCs have been great sources of aid for the community. He stated that by starting the food processing activity of products like ginger, areca nut, cashew nut, and turmeric, which are highly available in their village, they can now also offer income-generating jobs for their youth.

From 28th January to 3rd February 2021, the Ginger PG got an opportunity to promote ginger for trial marketing in partnership with India Harvesting Company Limited to export ginger to South Africa. The vision and mission of their IVCS is to reduce poverty and to develop their village by providing access to financial services including savings and loans. With the support fund, they plan to set up a processing unit for ginger.

Nanendro B. Sangma being felicitated with an award from the International Pepper Cooperation Ltd by Chief Minister Shri Conrad K. Sangma and Shri Dharmender Das, Deputy Director of Spice Board of India 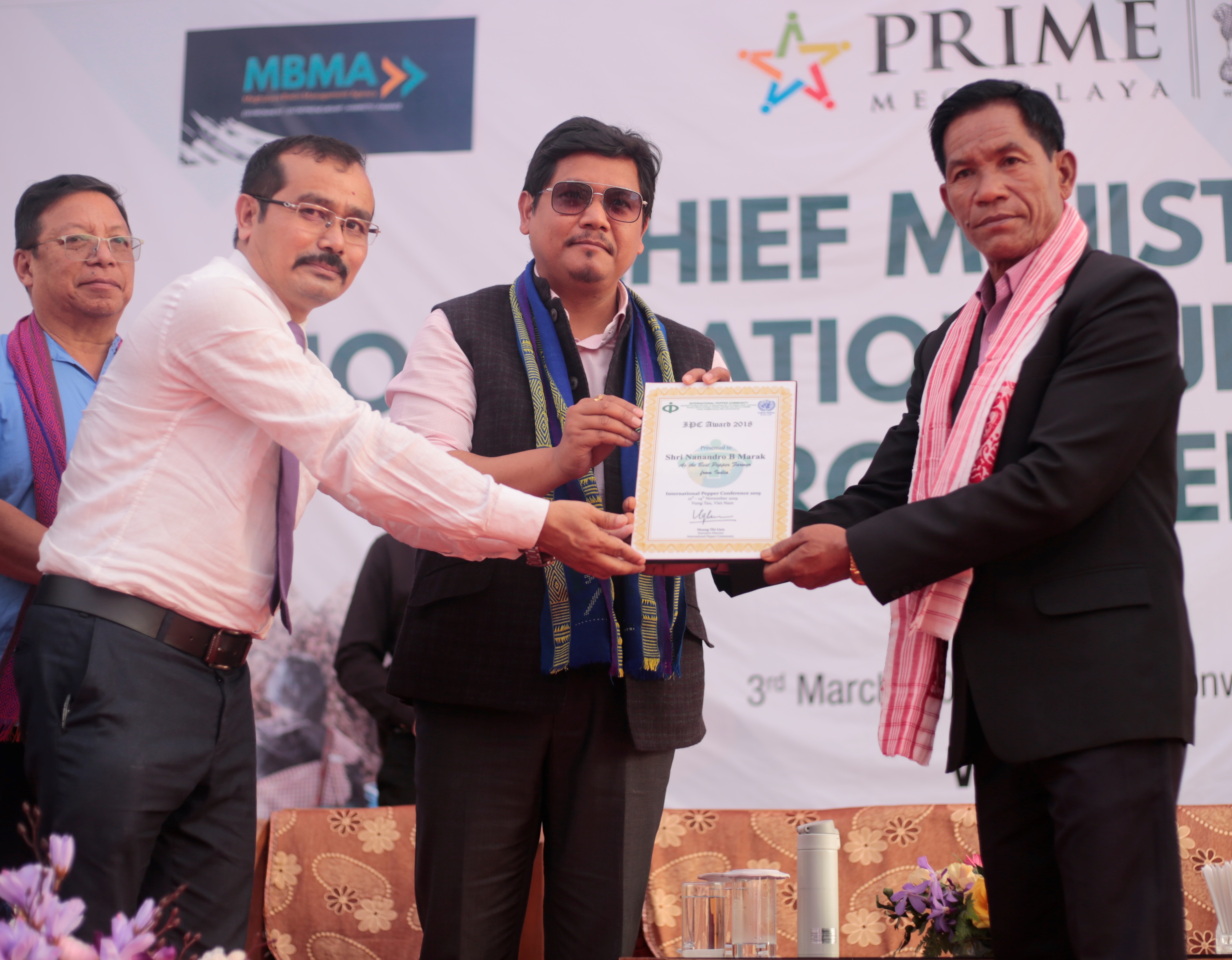